The New Zealand fur seal - kekeno in Maori – is the most common seal in New Zealand.

Other species of seals seen in New Zealand are: the NZ sea lion (rapoka/whakahao), the leopard seal and the southern elephant seal.

How can we make the difference between a NZ fur seal and a NZ sea lion?

Both species belong to the eared seals family. Eared seals feature external ears, hind flippers which can rotate forward allowing them to move fast on the land and no fur on the underside of their flippers. NZ fur seals can be differentiated from the NZ sea lions by:

Where can we see NZ fur seals in New Zealand?

NZ fur seals are found on rocky shorelines on the mainland and off shore islands, such as the Chatham Islands and Sub-Antarctic islands. The breeding colonies range from the North Island (as far north as the Coromandel) to the South (as far south as the Sub-Antarctic Islands).

What do NZ fur seals eat?

Their diet includes mainly cephalopods such as squid and octopus, crustaceous such as krill, and small fish but also bigger prey such as barracuda, conger eels, jack mackerel and hoki.

What is the conservation status of the NZ fur seal?

Their threat status is now least concerned, with a population recovering. However NZ fur seals once were on the brink of extinction (in the 1800’s). When humans arrived in NZ the population was around 2 million but then seals were hunted by Maoris for food and by European for meat and pelts. Since 1978, the NZ fur seal is protected by the Marine Mammals Protection Act. We estimate their current population at around 200,000. 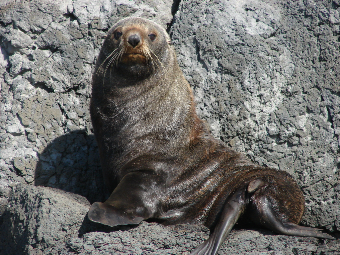 What their main threat today?

Despite the Act, human activities are still the main threat to NZ fur seals.

What is the size of a NZ fur seal?

Females are smaller and usually weigh between 30-50-kg and can be 1.5 meters long.

A male and his harem (Photo by Pohatu Penguins)

Diving: NZ fur seals dive longer and further than any other seal. They dive up to 238m (occasionally deeper) for up to 11 minutes.

Reproduction: Females have their first pup between 4 and 6 years of age. Every year they give birth to a single pup.

Males are sexually mature at 5 to 6 years old but not socially mature (able to have a territory and sire pups) for another 3 years.

NZ fur seals use a method called delayed implantation to make sure they have their pup during the warm months of summer. The egg is fertilised but only implants in the uterus 3 months later. Gestation is 9 months even though they mated 12 months prior the birth of the pup!

Pups can suckle their mother’s milk for up to 2 years but will start eating solid food before weaning. Once weaned the juveniles need to forage for food by themselves.

The life span of a NZ fur seals is 16 years. 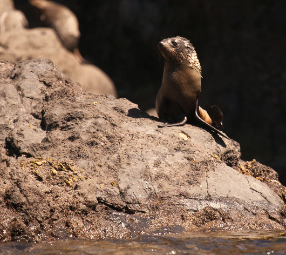 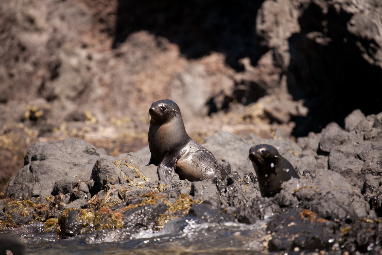 Can I approach or touch NZ fur seals?

No. Seals are wild animals and will defend themselves if they feel threatened. Just like us!
Adult seals can move quickly on land, inflict serious injuries to dogs or people, and can carry infectious diseases.
It is an offence under the Marine Mammals Protection Act 1978 to disturb, harass, harm, injure or kill a seal. A dog owner whose dog attacks a seal can face prosecution.

When watching seals, you should always respect these rules :

Keep dogs and children away

Never attempt to move or touch a seal

Never separate a mother and her pup

Yawning or not so happy seal telling you to back off? (D.O.C copyright)

What if I’m concerned about a seal’s well-being?

Here is a list of natural behaviours that do not need human intervention. You may see seals:

There are exceptions to our ‘hands off' approach. DOC will intervene if a seal is:

You need to tell us